How to be confident at work. Is it all an act? 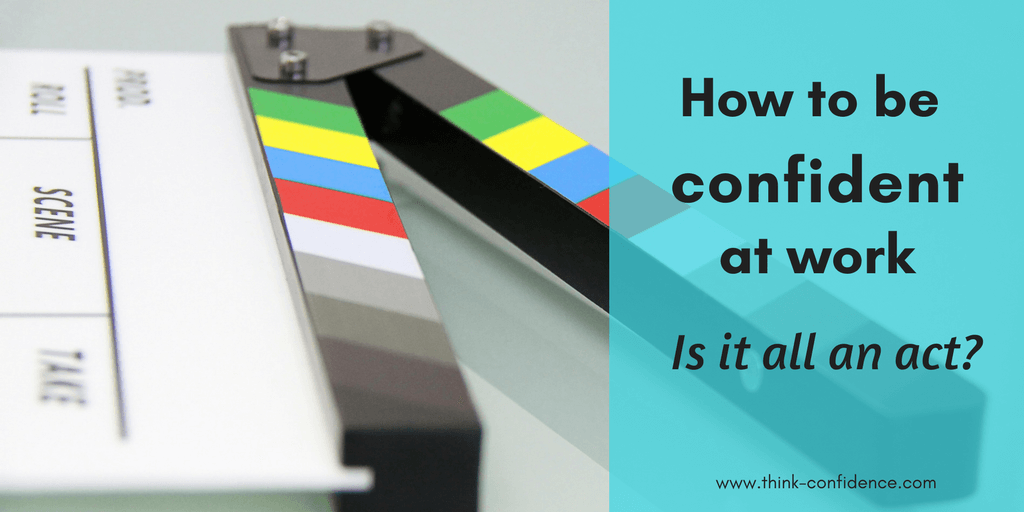 How to be confident at work. Is it all an act?

I’m going to be controversial. Bear with me please.

Would you agree that most people are different at work to how they are at home? We’re the same person but essentially we’re taking on two different roles; a home role and a work one. Often these two roles mean being two different people with two very different skill sets. It’s therefore not surprising that some people who are naturally unassuming and quiet at home struggle when it comes to being assertive and confident at work.

So where does that leave us? Well… whether they like it or not, for most people, if they want to be confident at work it involves acting. It means playing the part they need to play to achieve what they want.

In fact, it’s what truly confident people do. They act. And there’s nothing wrong with that.

I’m not talking about being false or pulling the wool over peoples’ eyes. Acting doesn’t mean being underhand or saying what you think the person wants to hear. Not at all… nothing changes in terms of your thoughts, your opinions, your beliefs or your values. What does change though is the way you get your point across.

To be confident at work, for some people the act involves significant change. It requires a major switch in the way they communicate. For others, it means just a subtle tweak to their body language.

Want to be more Assertive at Work?

Speak Up, Be Heard, Be Influential, Be Confident

One fact remains constant for everyone though.

We usually have to do something different if we want to appear confident at work and that does mean acting the part. Don’t worry, I’m not talking about becoming a Brad Pitt or a Jennifer Lawrence! That’s not what my confidence and assertiveness courses are about. By ‘acting’ I mean making subtle tweaks to the way you communicate with people so that they feel engaged by you and want to listen to you. It means making the most of what you already have.

So, to really be confident at work, while your thoughts and opinions stay the same, what does need to change is the way you actually communicate them; put simply… the way you behave.

Last week I had a meeting with Erin, the CEO of a leading advertising agency in London. She’s a perfect example of what I’m talking about. She looked and sounded every bit the senior executive; polished, knowledgeable, charismatic, confident.

But when I put her on the spot, she admitted it was all an act. She was putting it on. You’d never have guessed it though.

In fact, that’s exactly why she’d contacted me. In her mind, she was trying to reconcile ‘acting’ as a CEO with wanting to behave as her ‘natural self’; the mother of three young children who struggles on occasions to socialise, go to networking events, give presentations, run meetings.

Erin was finding it hard to get her head around the fact that while she was doing her job, tweaking her behaviour made sense. She felt uncomfortable that she had to change herself and work really hard sometimes to appear confident at work.

Unfortunately, as the CEO, being her ‘normal self’ wouldn’t work. She’d be seen as quiet, perhaps even apologetic; certainly not a leader.

So, as we talked, Erin began to accept that there was nothing wrong or unusual about changing her behaviour to suit her role. She was simply doing what all confident and assertive people do when they’re at work. She was being very conscious of the way she was coming across and she was adapting her communication style to suit the situation.

So what was she changing? What was she actually doing to make this happen? She was doing 2 key things.

Erin was thinking through beforehand how she’d need to change her body language, voice and demeanour whenever she entered a challenging environment. In other words, she was preparing herself by visualising the scenario and picturing in her mind how she would need to look and sound. This meant she was clear about what she would need to do that was different to her natural mode.

She was backing herself to commit to the change; she was ‘walking the walk’. She was making a real conscious effort to change the way she was coming across. She was doing this regardless of the challenge she faced; formal presentation, chairing a meeting, handling a conflict situation.

For Erin, in reality, acting meant slowing everything down; her speech, her walk, her hand movements. Straightening her posture and being conscious to smile more had a big impact too. She didn’t need to make any massive changes for people to perceive her as confident. Subtle tweaks were all that was required.

In short, Erin had the awareness to play the part for each situation. She found that making these adjustments to the way she came across made it easier for her to actually engage people when she was talking (rather than distract them). She noticed this helped her to be more influential too.

Interestingly, she’s found tweaking her style much easier after she accepted it was normal and made sense. She was surprised to hear that it was also exactly what other people she perceived as confident were doing.

Erin had actually been doing this for quite a while but because it didn’t feel ‘natural’, her sense had been that it was wrong. In fact, it was exactly right. It was the main reason why her colleagues described her as a super-confident, charismatic and dynamic CEO. The truth was they had no idea how she actually felt inside and how hard she was having to work to assume the right part!

She was an excellent actress. This was the secret to her success.

Of course, you don’t have to be the CEO of an organisation to apply this principle. Regardless of your situation, status or responsibility, if you need to be confident at work, you’ll need to act a little. You’re human.

Have you downloaded The 4 Step Confidence Plan?

Look, feel and be more confident

ONE DAY COURSES – Kick start your confidence. Feel and see an immediate difference.

ON-LINE CONFIDENCE COURSE – There’s no pressure. Learn in your own time at your own pace.

10 Things You Can Start Today To Overcome Low Self Esteem

If you’re struggling to overcome low self esteem, it’s likely you’re vulnerable to what you… READ MORE

The Ultimate Guide to Being Assertive At Work

When someone shows confidence through their body language, we automatically… READ MORE

If you have trouble remembering names, don’t blame your memory. Use this… READ MORE

Is Your Communication Style Helping or Hindering You Being Confident?

Discover how to get people to listen to you. Subtle tweaks can make a big difference… READ MORE